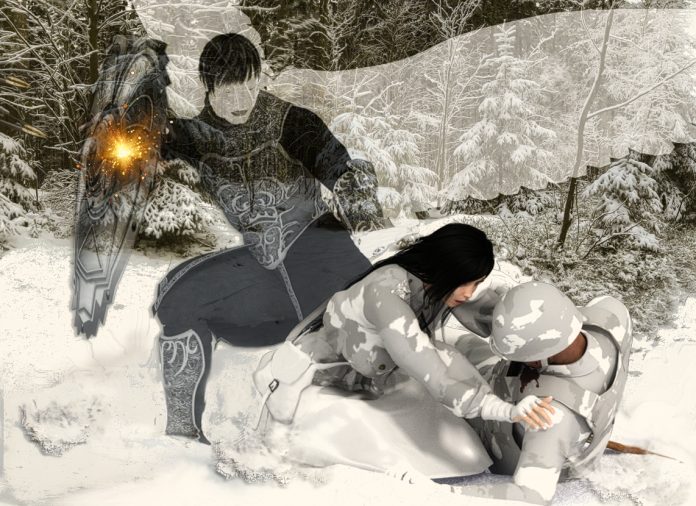 A friend of mine recently asked, “If you had to choose between your writing and your art, which would you prefer to do?”

Questions like that inspire a bemused wrinkling of the brow. Why would it be necessary to choose between two aspects of creativity that inform one another? And if I were to choose one over the other, how would that improve my craft?

Since my earliest efforts at storytelling, I’ve been drawing images and creating maps. I spent many an hour of school class time doodling and writing, rather than focusing on school work. The two activities have always been integral to my process, and while some observers don’t get what I do, not every reader enjoys what I write, either. I’m not here to please the masses. Creating art helps me visualize my story, which aids in describing the world and the characters inhabiting it.

I started all of this many years ago, painstakingly drawing my heroine and hero by hand.

Now, as the story evolved from a fantasy milieu into something completely unique, the way I depicted my characters also changed. Rendering enabled me to show character emotions — which was the reason I abandoned drawing altogether. Rendering eventually turned out to be a lot faster, too. However, developing skill in 3D art revealed a set of different problems, most of which relate to clothing and the way clothing works in a 3D image program.

Essentially, there are two major types of cloth props. The first is conforming, in which the prop is essentially pasted onto the character’s shape. For the 3D program that I use, the most commonly available clothing props are politely and affectionately referred to as “slut wear” among the artists in the community. The reason for this, is that “slut wear” sells. Most people who are creating 3D imagery with affordable programs (like DAZ Studio and Poser) do so with a sensual / fantasy / fetish focus. Clothing that is modest is hard to find, and often doesn’t look very good. That’s reality. I’ve heard no end of lamenting over the images I create and have endured my share of censorship because of this problem.

There’s a real double standard at play in this as well. No one complains about male figures appearing shirtless, or in tight clothes. It’s the images depicting females — especially Brenna, her sister, Thea, and Bronwyn — that stir the ire of the Modesty Police. My family is full of busty women, and I grew up with a standard of beauty that was modelled by my mother, eldest sister, aunts, grandmothers and cousins. I also heard the nasty remarks that envious women and lecherous men whispered about the women I loved just out of earshot, and the very same disdain frequently projected on female family members who grew into well-endowed women is also hurled against the characters I portray in my stories. Why not make them smaller bosomed, you may ask? I do this to critique societal attitudes against women who are judged by their body shape, rather than their character. This is a theme that runs through every novel in the Deveran Conflict Series. If you read the books, you’ll grow irritated at the way my characters are treated as they experience these very common attitudes from the men and women who interact with them.

Admittedly, there is a fine line between realism and the ridiculous. Because 3D art is often the focus of fantasy — particularly male fantasy — all manner of preferences for the human form exist. Some portray childlike fairies, others are more like the images below:

This type of imagery is really not my thing. Some of the women I depict are certainly busty, but all of them are well within the range of realism for human females. Well-endowed women exist. Get over it!

The second type of clothing prop used in 3D art is dynamic. It’s a computer-calculated process that simulates the way cloth actually flows over the human body, and while the results are more realistic, simulation is harder to do and results vary from render to render. I have actually creating dynamic cloth props of my own and rendered them, as you can see in the images, below.

Now, there are issues with dynamic clothing props. The first is that they tend to lack seams, buttons, pockets and other features of modern clothing. The second, is that if I don’t make a dynamic blouse fit tightly on Brenna, she looks like she’s wearing a tent. I understand that Billie Eilish does that deliberately, and I can totally understand that she does so to avoid stupid commentary about her body shape — as if that’s something she can help. Personally however, I prefer the tighter fit, as it’s pleasing to the eye. That’s not an admission of some secret depravity. It’s merely a matter of preference. If what I’m rendering offends you, by all means, don’t look.

I have to work withing the limits of the tools I’m using, which can be frustrating. I don’t model, which means I’m dependent on what other people have created. The outfits I’ve made in the past (in a program that no longer works) are very simple and not well suited to what I’m trying to portray. This problem exists for clothing, hair and backgrounds. I simply do the best I can with the capabilities I have at my disposal. It’s a LOT of work, but it’s something I enjoy.

Why must I choose between writing and art? It’s clear that an audience exists for both, and in some cases, those are the same people. Over 60% of my Instagram followers were women, yet when I posted imagery of my male characters, there was far less engagement — often only a quarter, or a fifth of what I’d get from showing the women in my stories. I kept posting renders of my female characters because it fed the algorithm and I was trying to build an audience there. There was nothing more to it than that.

If you like looking at what I render, watch me on Deviant Art. That’s where I do most of my posting now.

If the world I’m depicting intrigues you, give one of my novels a try. You can start here:

This is the prequel to my latest novel, Blood on the Warpath, and it’s completely free for you to enjoy.