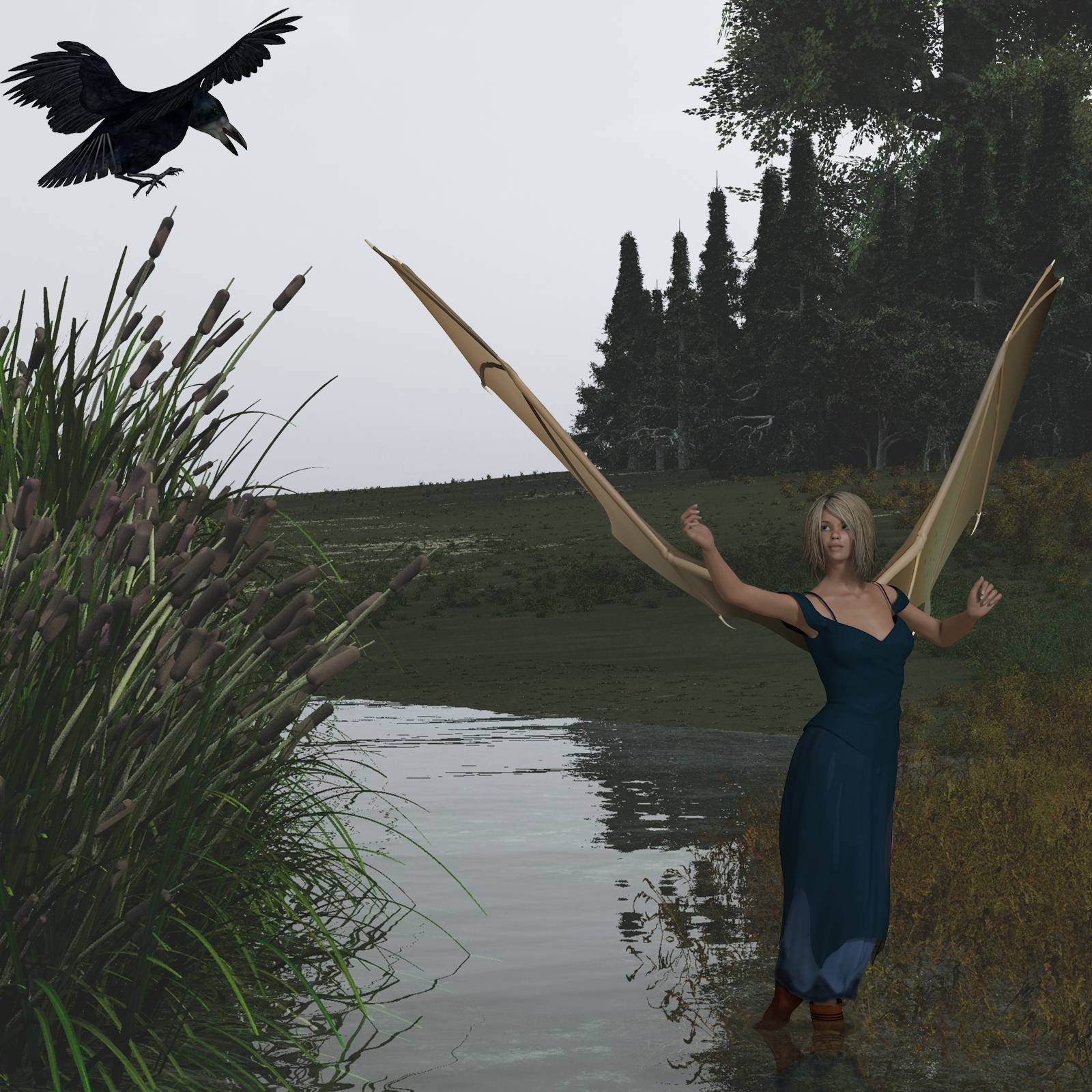 She is, by far, the most difficult character to write. Jhiran Vell is a gwynling, an endangered, feral humanoid species whose fragile communities live in the canopy of redwood forests. A widow, roughly 40 years of age, Jhiran lives an itinerant lifestyle, supporting herself by stealing food, clothes and any supplies she may need. While this, in itself, should not present much of a compositional challenge, the difficulty of her character is founded on the non-human aspect of how she thinks and behaves. The gwynling woman experiences no moral ambiguity or conflict in anything she does. Jhiran never considers the spiritual relevance of her own actions. For her, brute survival is the only ethic that matters.

Jhiran is clever and adaptable to a certain extent, yet she has a childlike inability to plan for the future and modify her behavior to suit the needs of others around her. Thus, the sloppy way she eats — and she eats a lot — her often bedraggled and messy appearance, her toilet habits and her penchant for stealing create conflict. Within her own community this would not be a problem. The major difficulty for Jhiran is that she lives mostly in the shadows of humans in the Deveran Conflict Series, and her interactions with them often strain against their patience. This is an essential element of her odd relationship with Algernon.

Although she’s about the size of a seven-year-old child and is frequently mistaken for a little girl, Jhiran’s life experience makes the gwynling woman difficult to understand and quite formidable in unexpected ways. She can be very endearing one moment, and exasperating the next. She will express biting criticism of character, yet remains fiercely loyal to her friends and will fight to defend them.

Why is she like this? A lot of it has to do with her mysterious ability to pull thoughts and memories from the minds of other people. If she can maintain eye contact, Jhiran will draw from the well of another person’s experience. It’s impossible to keep secrets and motives from her. Jhiran can also project her own thoughts, as well as the actual experiences of others, directly into the minds of anyone with whom she maintains eye contact. Hence, even though their first contact was violent, Jhiran adores Algernon. She can see the goodness of his character in a way that is not always evident to anyone observing him from the outside.

This has also made her quite jaded and cynical. Her expressionless face makes her feelings and attitudes nearly impossible for people to discern. Typically, people ignore her as irrelevant. Sometimes, that’s a deadly mistake.

Gwynling wings are best suited for gliding from high places. Jhiran is clumsy in flight and typically doesn’t use her wings unless she needs to escape. As far as rendering is concerned, I can’t actually show the fragile, membranous type of wings in an image that I imagine in my head. These fold easily behind her back and are no more visible than folded bird wings on the ground. The demonoid, bat-style wings I have to use in renders are a compromise. These are much larger and don’t actually look very much like the wings I’d imagined on this character.

Perhaps the most detailed description of her flying ability can be read in “Dreams and Missions,” the fifth novel of the Deveran Conflict Series. In the scene below, Jhiran is taking on a predatory glacier gull that chases her off a Superstition Mesa cliff. The nearly one mile fall would certainly be lethal any creature who could not fly. Jhiran, however, is not easy to kill.

The unpolished nature of Jhiran’s behavior makes her a tough character to write. Yet her psionic and flying abilities, along with her skill as a thief, make her an important supporting figure in several of the Deveran Conflict novels. Many readers find her intriguing. Perhaps you will, too!