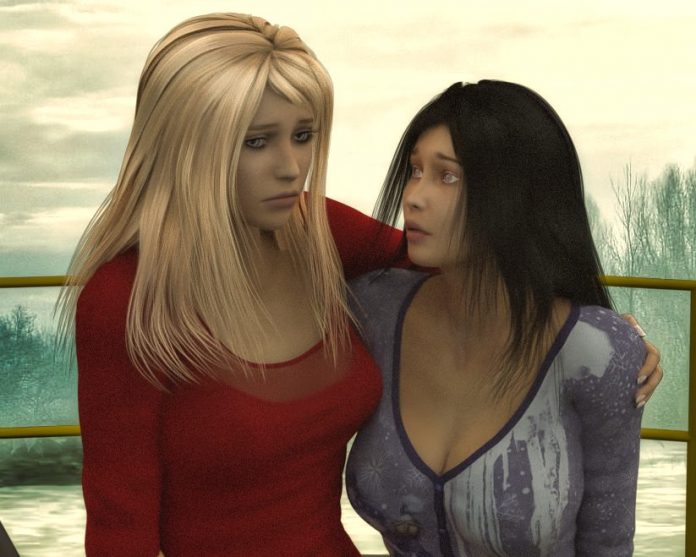 Common interests form the foundation for close relationships. Charisma and beauty may initiate attraction, even in the platonic sense, yet without shared experience, two people have little to build upon. It should be self-evident that social creatures like people require an environment of cooperative tasks or entertainments in order to build relationships.

Kira’s skill as a seamstress, a weaver and gardener are of little interest to Brenna, who grew up in a wealthy family and never had need to develop skills of that kind. Likewise, Brenna’s musical talent is on an entirely different level than Kira’s, requiring devoted practice that usually extends for many hours per day. Kira understands and admires the self-discipline required to perform at such a high level.

In turn, Brenna appreciates Kira’s thrifty nature and the creativity required to design, cut and sew clothing, in part because Kira can look at a garment in a display window, buy fabric, and replicate what she has seen using her sewing machine. As one who considers beauty and abundance a reflection of Allfather’s goodness, Brenna also finds Kira’s interest in gardening praiseworthy.

Concern for a friend leads to empathy and compassion. A true friend seeks what is best and strives to elevate the experience of the other person. This theme runs through the Deveran Conflict Series in the strong relationship between Kira and Brenna. The bond between these two women grows because of the genuine concern they extend toward one another.

When Kira began her public ministry for sex workers in Marvic, she did so facing a lot of opposition from people in town who did not approve of her efforts, questioning the morality of her ministry to strippers and prostitutes. However, Kira could count on the strong support of her family, especially Brenna, whose honor as a Heroine of the Republic lent credibility to this innovative and unusual service project.

Where Brenna, the eldest child, had grown up in a close-knit family with sisters as companions, Kira came from a dysfunctional family with two brothers, both of whom were older. Therefore, Brenna had an established track record of loving a female sibling. Kira quickly benefitted from the ease of acceptance and compassion she received from the Lithian woman. On the other hand, Kira’s confidence, her martial spirit and her growing faith contrasted with the shy demeanor, gentle femininity and established belief of Brenna’s sisters. This made the young Tamarian woman intriguing to Brenna.

The reliability of consistently unselfish conduct between the two women quickly grew into deepening trust. Kira, who’d never had a sister, learned that confiding in Brenna wrought feelings of solidarity. She could process complex feelings aloud without fear of judgment or criticism. In particular, Brenna’s strong faith provided a safe haven for Kira to express raging doubt concerning her worthiness of God’s care. Unlike the self-righteous members of the Temple Elsbireth’s priesthood, who judged Kira harshly for her foul mouth, the relationship she’d sustained with Sister Astrid, and envied Kira’s charisma and beauty, Brenna’s belief in forgiveness, grace and repentance – along with confidence that physical attractiveness represented a praiseworthy expression of Allfather’s goodness – made her refreshingly accepting and slow to judge.

A humility wrought by her experience at La Casa del Matados informed Brenna’s perspective. After embarking on her murderous killing spree, she couldn’t use her own character as a reference to compare personal piety with anyone else. Brenna extended this grace to Kira. Though she would not set foot in a strip club or a brothel, and certainly didn’t approve of the activities common to these places, she affirmed Kira’s ministerial efforts and even healed women who’d been abused after Kira brought them to safety.

As soon as Kira’s public service began in Marvic, her life came under threat. While she and Algernon defended themselves admirably, the attacks intensified, hinting that Kira’s effort to save women from the sex industry was impacting some very powerful people in the city. As the conflict escalated, Brenna asked Kira to stay with her and Garrick behind the palace wall, for safety.

All of this came to a head one fateful night, when Garrick had to defend his little sister from armed attackers. Had it not been for Brenna’s ability to pray over Kira and heal her life-threatening wounds, it’s likely that the young woman would have perished.

During their first encounter, shortly after Algernon and Astrid brought Kira back from captivity, the intimate nature of healing Kira led Brenna to quietly confide in her mother that Garrick’s little sister had become pregnant. Lady Alexina advised Brenna to discreetly disclose the news to Kira, but lacking the ability to explain the truth in Tamarian at that time, she told Algernon – who spoke fluent vulgate – instead, fully expecting that he would relay the information on her behalf.

But he didn’t do so right away.

When Kira returned home, she discovered and disclosed to her twin brother that she’d become pregnant. Algernon, knowing this already, informed his sister about Brenna’s previous warning that any pregnancy during opium withdrawal might result in miscarriage. As he expected, she grew angry and swore at him. Kira also felt frustrated that Brenna didn’t tell her directly and secretly hoped that the Lithian woman had been wrong about everything.

Yet a few weeks later, Kira experienced a painful miscarriage while visiting at Mrs. Bergen’s house. With her brother in court, she faced the pain and humiliation alone.

Brenna had been right. An honest and difficult conversation followed.

With her proficiency in Tamarian improving, Brenna outlined the reasons why she’d not directly conveyed Kira’s pregnancy and possible miscarriage risk. As this was a deeply personal matter, she’d felt that Algernon was the most appropriate person to pass on the troubling news. Kira understood Brenna’s logic and extended forgiveness. After this incident, communication between the two women became much more forthright.

Several weeks after her wedding, Brenna faced a miscarriage of her own. With Garrick deployed to the Saradon, she endured pain and experienced an erosion of her confidence as a woman. Desperate to begin a family of her own, knowing that she would likely outlive her husband by many decades and worried that he might perish in combat, Kira’s compassion, understanding and support strengthened Brenna’s courage at a time when despair sang from a dark place in her consciousness.

Having grown up with an alcoholic father, Kira also noticed an unusual increase in Brenna’s wine consumption during Garrick’s absence. Where the Lithian woman had been strictly moderate in her drinking prior to her husband’s deployment – limiting herself to a single serving of wine with her evening meal, and always in the company of other people – Kira realized that her sister-in-law had begun drinking alone. That was unusual enough to warrant a heart-to-heart conversation. Brenna took Kira’s gently-worded rebuke graciously and decided to forswear her wine indulgence altogether as a precaution, at least until after she had children. This choice harmonized with Garrick’s practice, as neither he nor Algernon drank fermented beverages.

In Kira, Brenna enjoyed an intelligent and devoted source of support and companionship during her transition to life in Tamaria. In Brenna, Kira found the sister she’d never had, one who stood by her side in whatever peril she faced. Their mutual compassion blossomed into lifelong, familial commitment. You can watch an illustration of the dynamic between the two women at the following link:

A bit of a warning . . . . I had to use a pair of AI voices for Kira and Brenna. They’re clearly not human, and the technology isn’t yet ready to replace an actual person reading the part. Please extend some understanding, as this is the best I can do for now.

The relationship between Kira and Brenna brings joy, support and accountability into their lives. These features of feminine friendship are rarely portrayed in our books, films and television shows, but they should be.