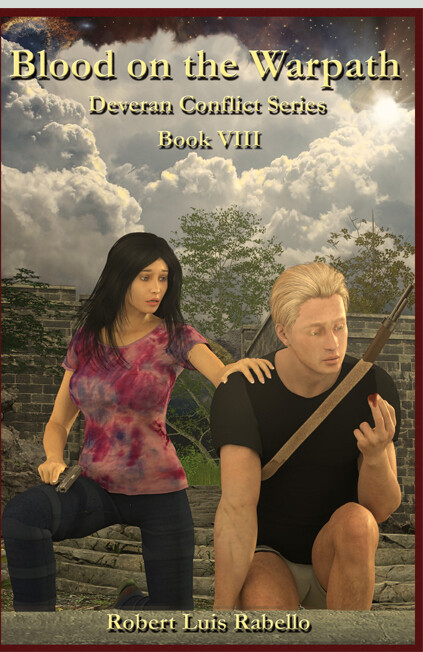 Blood on the Warpath (E book)

Weary of family conflicts and social friction, Brenna used every bit of her charm and wit to convince her husband, Garrick, that they should attend a music festival in the Nordan Coastal Colony. Neither of them had ever seen the ocean, and since their honeymoon had been cut short by his last deployment, Garrick finally agreed to go.

An expert musician, Brenna had never lost a piano competition in her life. Hours of daily practice, studying music theory and dedication to excellence endowed her skills that secretly bolstered the reticent woman's need for affirmation. She wanted to attend the festival, but for all the wrong reasons.

Garrick, with an especially difficult deployment behind him, is gradually recovering from combat trauma. His hyper-vigilance worries and wearies his wife, who too often takes the brunt of his impatience and paranoia. But the opposition he expressed to attending this music festival was rooted in the mysterious nature of Brenna's invitation. Why would a distant music festival invite her, when she hadn't competed in several years? Something about this particular festival bothered him.

A secretive and wealthy society of Kamerese business interests and ideologues has smuggled arms into the Nordan Colony and provided training for locals who have long chafed under Nordan rule. Eager to drag their war-weary ally, the Republic of Tamaria, into the conflict, the music festival serves as a trap to lure Brenna -- who has also earned Tamaria's highest honor for valor in combat -- to her death. Believing that her demise would serve as a catalyst to prompt Tamaria into war, Los Patrones del Estado pushes local insurgents to violently overthrow Nordan rule.

Relying on faith, their wits and military training, the amorous couple flee the conflict. Unable to read or speak the language, they strive to cross the border into nearby Kameron, where they expect to find safety among their allies for an uneventful return home. Members of Los Patrones, however, have other ideas.

Along the way, Garrick and Brenna rescue four orphaned children, whose father tried to abuse Brenna when she was a maiden. Caring for these young ones constrains the lovers' marital conduct and significantly complicates their efforts to escape.

Who can they trust? Can others trust them? Join the lovers as they seek safe passage across a hostile border while their way is obscured by Blood on the Warpath.