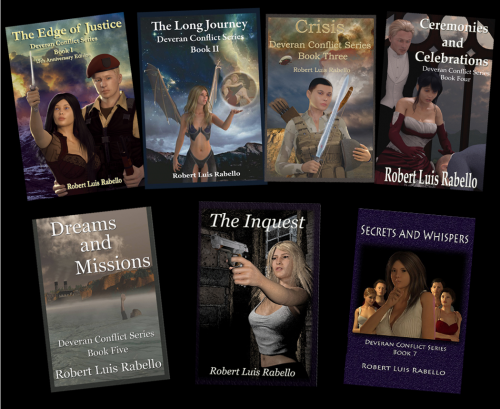 While the title of this post may sound a bit pretentious, nothing about the way I write novels approaches the way I compose for a post-graduate class. I don’t start with the archetype and draft a plan. Writing stories is much more organic and subconsciously processed than is the case when I pen a thesis.

However, since I actually teach creative writing, the idea for this post arose while preparing lessons for an English class. In my presentation, I encouraged students to think about nine different situational archetypes before building their stories. I don’t do this, but thought you might find how those archetypes apply to my own work interesting.

Because the novels I write are epic tales of intrigue and adventure, most have two or more plot lines blended into a single book. This is the reason why word counts in the series push toward the 200 000 range. My audience gets a lot of value for inexpensive novels — especially the e-books — and thoughtful readers can find more than one situational archetype at work in every story.

1. Overcoming the Monster:  The hero must overcome some force, or some thing — usually evil — more powerful than himself. This type of story focuses on courage and personal skill.

In The Edge of Justice, both Garrick and Brenna deal with the power of the Azgar’s Northern Liberation Army. They also face down Deathwolves, fearsome creatures bred by Azgar scientists to kill indiscriminately. Brenna battles with one of these in Ceremonies and Celebrations too, but the encounter is brief.

Crisis features this archetype as Algernon and Kira encounter giants on her land. Brenna, who becomes a prisoner of war, endures torment at the hands of men who have power over her while she is helpless. That’s why she bears a scar on her neck and why she sports a shaven head on the cover.

The Inquest centers on a threat to Kira’s life by enemies who are deeply entrenched and well connected in Tamarian society.

2. The Quest:  The hero must leave home to search for truth or treasure.

Algernon’s search for Kira in The Long Journey fits this archetype nicely. Garrick, during his officer’s training program, seeks a commission as a kind of treasure.

Brenna, fleeing her homeland from the Azgaril in The Edge of Justice, views Tamaria as a kind of fantasy land where she can live in freedom.

3. Voyage and Return: The hero journeys to a land that’s very different from home and overcomes various threats to survive. After conquering or escaping, the character returns home a more mature person.

This is the main archetype for Garrick’s development in Dreams and Missions.

Cassie and Jared journey as hostages to King Alejo’s palace in Ceremonies and Celebrations, where the two of them prove their mettle and value to the king before returning to the Velez estate, and then leaving to live with Jared’s family.

My current project, Blood on the Warpath  outlines the struggle of Garrick and Brenna, trying to return home as an insurrection erupts in the Nordan Coastal Colony, while Algernon and Bronwyn journey to Vathera, hoping to repatriate the ashes of a friend. In the latter case, the young couple become the targets of a syndicate determined to support the Kurian uprising in  the Nordan Coastal Colony.

4. Rescue or Revenge: The hero is compelled by love or reward to rescue someone held captive, usually with nerve and daring. The hero seeks vengeance on evil done in the past. This archetype abounds in fairy tale stories of the gallant night rescuing the damsel in distress.

The entire experience of Algernon in The Long Journey is focused on finding and rescuing Kira from abuse. He enters a war zone completely unarmed, with only his wits and martial skill to protect him.

In the latter half of Crisis, Brenna returns to the place of her torment and metes vengeance on those who mistreated her.

The Inquest, while it fits into the “Overcoming the Monster” archetype, also outlines Algernon’s plan to bring Kira’s adversaries to justice.

5. Rebirth / Redemption:  Involves a situation that brings about the enlightenment, redemption or transformation of a character.

Kira’s change in The Long Journey is probably the best example of this archetype. After her brother’s daring rescue, she devotes her life to helping other women who are trapped in the sex trade.

Tormented by guilt and evil spirits in Ceremonies and Celebrations, Brenna learns the value of forgiveness. She becomes much more humble and far less willing to shed blood in subsequent stories.

Although she is a tertiary character, Solace, in The Inquest, overcomes her fear of men in light of the way Garrick and Algernon treat the women in their lives. She moves from being dependent and helpless, into an independent young woman who can look after herself.

4. Transition: The often uncomfortable change of new situations or circumstances. Common themes include coming of age or metamorphosis.

All three of the main female characters in Dreams and Missions experience the change of new situations and circumstances. The first is Brenna, who enters the fertile period Lithian women experience – known as Y Newen – while Garrick is deployed. She begins her work as a music teacher and struggles to overcome widespread racial prejudice.  Kira begins her ministry without the formidable help of her brothers, while Bronwyn learns of Algernon’s indiscretions with Brenna’s sister, Thea, and has to either forgive, or walk away from that relationship.

The Long Journey explores Garrick’s transition during officer training and details his first combat experience as an officer.

5. Romance / Forbidden Love: Two people meet, fall in love and struggle to stay together. In Forbidden Love, there is significant social or familial pressure to break the relationship apart.

One of my beta readers has described my writing as “soft science fiction flavored with romance.” Every book in the Deveran Conflict Series deals relational love. However, Ceremonies and Celebrations describes the race-oriented opposition of Garrick’s mother to his marriage, while Secrets and Whispers is mainly focused on the opposition of Bronwyn’s family to her marriage.

While Brenna is certainly close to her family, her story arc begins after they have separated. For her, the break with that dependent world happened before she entered the narrative, and we subsequently learn that she had her own ideas about what to do with her life years prior to meeting Garrick. However, in Secrets and Whispers, Bronwyn reluctantly breaks away from her family expectations and becomes the woman that none of them ever expected she would be.

7. Temptation: The noble hero’s character flaws or strengths are revealed by the desire to do what is wrong.

Several of my readers have complained about Algernon over the course of the series, but none were ever as strident as those who groused about his wayward interest in Thea Velez during the latter part of Ceremonies and Celebrations, and through most of Dreams and Missions. Do none of you ever behave in ways you later regret?

He DOES learn from his experience, and in the end, becomes more of a devoted man than he ever was beforehand. Isn’t that part of the human experience?

While it’s nice to examine themes and archetypes, it’s entirely possible to read every word in the series and enjoy the characters, their adventures and personal growth without analysis. However, now that I’ve done this, aren’t you at least a little intrigued?

Building the World of Devera