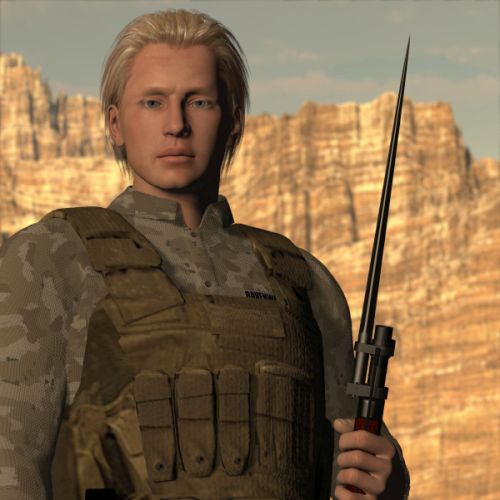 Being a first-born male carries a burden that younger siblings seldom appreciate. At the core of his personality, Garrick is responsible. He understands what needs to be done in order to sustain the ones he loves, and he devotes himself to making sure their needs are met. Garrick will deprive himself to make sure that his younger siblings, Kira and Algernon, have resources to thrive. Their confidence in him is rooted in many years of his consistently looking after them.

This trait extends deep into childhood. Garrick’s early memories of happily married parents faded quickly as the birth of his twin siblings approached. Cyrus – their father – never accepted the younger children as his own, suspecting that his wife, Sylvia, had conceived them with another man. Even at a young age, Garrick took on the responsibility of protecting his sister and brother from bullies, their mother’s neglect (though she favored Kira) and eventually, their father’s drunken rage.

As a soldier, Garrick takes his role seriously and believes that his mission to protect the Tamarian people from their enemies gives his life purpose. His intelligence, adaptability and emotional control permits him to think rationally under fire. The more experience he gains in combat, the more effective he becomes in directing his platoon.

Natural charisma runs in the Ravenwood family. Garrick developed an expectation that others would look to him for leadership because his parents rejected their appropriate roles while he was growing up, and he took on responsibilities far in excess of reasonable obligations for his age. Circumstances forced Garrick to cultivate a precocious ability to think and act like an adult, a skill that eventually translated into personal confidence.

Garrick’s uncanny instincts in combat raised the interest of senior officers, who frequently shielded him from the negative aspects of military bureaucracy whenever he made rookie mistakes.  They see great promise in his future, take interest in his career, and offer counsel – sometimes sternly – to correct his deficiencies.

The spiritual skepticism I describe in Garrick stems from my own disenchantment with Christian faith in late childhood through early adulthood. I can write about Garrick’s disbelief with authenticity because, at one time, I also rejected the idea that anything supernatural impacts and influences our world. Garrick views his own environment through that lens, he’s comfortable with his perspective, and feels no need to change. How does he handle Brenna’s mysterious healing ability? He ascribes her skill to a natural capacity not yet understood in a scientific sense, and leaves the tension it creates unresolved.

While I realize that some readers feel uncomfortable with his point of view, particularly in contrast with Brenna’s vibrant belief, I am not writing stories with proselytizing intent. Their relationship works because he respects her faith, and she honors his choice to think as he chooses. Establishing spiritual boundaries between them creates friction in the stories, but eventually, they find a way to live in harmony with their differences. It’s important for readers to remember that my focus has always been on developing and sustaining characters, not on convincing anyone of my cherished points of view.

Besides, the stories are more interesting when Garrick’s thinking differs from how Brenna understands her world.

Read this scene in The Inquest

Despite not graduating from his local high school in Deception Creek, Garrick has always been a voracious reader and is an autodidact in philosophy and science. He enjoys non-fiction, but has also read a number of Lithian children’s books — which were all religious — as a means to learning Brenna’s language and gaining insight into her culture. He loves dancing, swimming, writing poetry and — to her delight — hides love couplets for his beloved Brenna all over their home.

During his youth, Garrick took on the task of managing his father’s apple trees, their hay fields and caring for their horses. This instilled work ethic, but also encouraged a deep understanding of animal husbandry and turned Garrick into an expert orchardist.

Listening to Brenna practice evokes memories of an old, hand-cranked record player that Garrick’s mother used to play. In early childhood he developed an appreciation for music that finds ongoing fulfillment in Brenna’s devotion to the piano. Her private students and the school choir use their studio for rehearsal. Watching her teach young people inspired Garrick to pick up the trumpet. Because I also did this as a youth, my descriptions of his struggle with embouchure and lip fatigue stem from real life experience.

Garrick sincerely and passionately loves Brenna. In The Edge of Justice, I describe that he would have loved her even if he’d been blind, but like most men, her physical beauty serves as a continual attraction for him. The reason Brenna chose Garrick over other men she’d known in the past – including Woodwind – had a lot to do with how carefully he controlled his libido in her company.  He respected her boundaries, even when she wanted to move them. While they were dating, he only pushed beyond those on one occasion – and then only to compel her honesty. When she asked him to stop, he did.

Brenna’s visual appeal had a visceral impact on Garrick from the outset. Once she permitted his touch, she recognized his arousal, but appreciated the fact that he “didn’t act like a tomcat about it.” Readers who insist that their relationship should have been absolutely chaste before marriage are projecting a Puritan cultural ethic onto characters for whom that would be very strange. While there is some social criticism at play in the Deveran Conflict Series, Garrick’s restraint stems from his cultural respect of women. That’s an ethic steeped into Tamarian boys from a young age, and Garrick remains true to his upbringing by enjoying Brenna’s body only when, and to the extent, that she permits it. This kind of deference puts her in control of their intimacy. He’s not hen-pecked, and is sufficiently confident in his masculinity that he doesn’t need to insist on getting what he wants all the time. Garrick naturally responds in this manner to the woman whom he both loves and respects, and she in turn, lavishes her intimate gifts on him liberally.

In that light, his sexual relationship with Brenna should be interesting.

Garrick’s father, Cyrus, was a regional champion swimmer who wanted his eldest son to pursue competitive swimming. Using what little money the family had, Cyrus paid for two years of Garrick’s training before he could no longer afford to do so. Garrick landed on the development squad for the local team, but never competed. Yet the swimming, coupled with hard labor on the farm, sculpted Garrick’s body into a beautiful example of the male form that Brenna finds irresistible. She loves his strength, the look of his face, and finds the hair on his chest exotic, as Lithians only grow hair on the top of their heads.

While he is much taller than Brenna, Garrick is about average height for a Tamarian male. Due to his youthful appearance, many adults in the Deveran milieu express astonishment that grown men follow someone they presume is inexperienced into combat. He does need to shave – just not very often – but because he’s only ten years younger than Brenna, most people think he’s older than she is. Before anyone gets too upset at the difference in their respective ages, I’m not describing anything inappropriate here. In Tamaria, people reach the age of majority at 13. Both Garrick and Brenna are adults in their world.

Having regular sex with a Lithian woman will slow his ageing process, as some of her longevity transfers to him. At this point in the story it’s too early to notice the effect, but as Kira and Algernon begin to look older than their elder brother, that will become more evident.

Read this scene in Crisis.

The Tamarians have developed several war and transportation technologies that impact Garrick’s role in the novels. Because their traditional enemies were giants, the Tamarian Defense Force uses large caliber rifles with bullets that penetrate, then explode. Shoulder fired solid-fuel rockets, rack-mounted solid-fuel rockets and large, liquid-fueled rockets with a range in excess of 30 miles feature prominently in the early novels. Tamarian armed forces also fight with rotary cannon that give a single squad impressive firepower.

Hybrid steam-electric locomotives, electric trucks and hybrid airships contribute to the technology of Tamarian culture. Garrick’s platoon becomes the first to ride into battle in an airship – much to Brenna’s dismay. (She refers to the airships as “floating bombs.”) He also witnesses the introduction of radios into the military.

Is it science fiction, or steampunk? You decide.