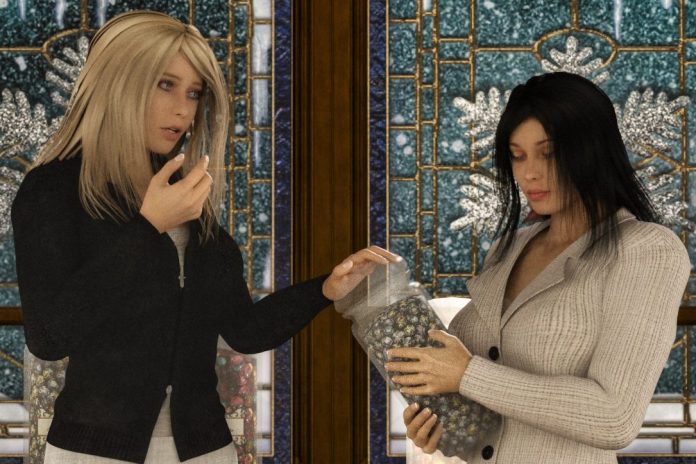 A friend of mine recently asked, “Which is more important to you, your writing, or your art?”

It’s an interesting question, as I’ve never considered myself an artist, yet I use 3D art as a way of promoting my books. I started out with expressionless drawings, yet when I saw Poser 2 in a computer shop one fateful day, I believed I’d finally found a way to illustrate the stories I’d been writing.

My first efforts at this were terrible, with stiff posing, few choices in clothing and hair, and lighting that was simply awful. But, I kept at it, and now, rendering images has become central to my promotional efforts. This is nicely illustrated by looking at renders I created to express Christmas wishes in the 3D art community over the years.

This is the oldest Christmas render that I’ve kept, dating from 2009. I can remember creating others, but they were so terrible I didn’t keep them. I used a photo for the background and rendered over the top of it in Firefly. There are some glaring problems with posing, especially in Kira’s shoulders and hair, but the worst issue here relates to bad lighting.

A year later, the posing and expressions are better. I’d used Photoshop to create the snow effect, which isn’t great, but is better than nothing. Again, this is the Firefly render engine, and my struggle with lighting persists.

We jump to December of 2014 for this render, where we see the addition of Astrid — who’d actually been in the series since “The Long Journey” — Tembe, and Solace. At this point, Algernon is nearly as tall as Bronwyn. From a technical standpoint, I think the posing in this image looks fairly natural, but the lighting in Firefly is still vexing me.

My move to Imaged Based Lighting happened between the previous render and this one, which comes from 2015. This is still Firefly, and I know what the problem is with this image now, but at the time I was still learning. I also didn’t have the tools available to fix Brenna’s hair, or the glaring disappearance of her left breast into Garrick’s chest. We learn by making and fixing mistakes, right?

The introduction of the Superfly render engine changed the way I’m able to handle lighting. This December 2019 image looks much more natural than anything I’d done in Firefly. I’ve changed both Bronwyn and Algernon’s hair, and made her heavier. I pasted this render onto a black background and uploaded it with a Christmas message to Instagram.

My proficiency has steadily improved through the years and I’m having far fewer struggles with light than had been the case in the past. Changes in this image include the reality that Algernon is finally taller than Bronwyn. This render comes from December of 2020.

Finally, here is the Christmas render for 2021. I sincerely hope you’ve enjoyed this historical foray into the development of my rendering skills.

Having shown you all of this, the reason I create 3D art is to illustrate what I’m writing. Since “Blood on the Warpath,” my latest novel as of this posting, is doing better than the last few have done, I must be doing something right.