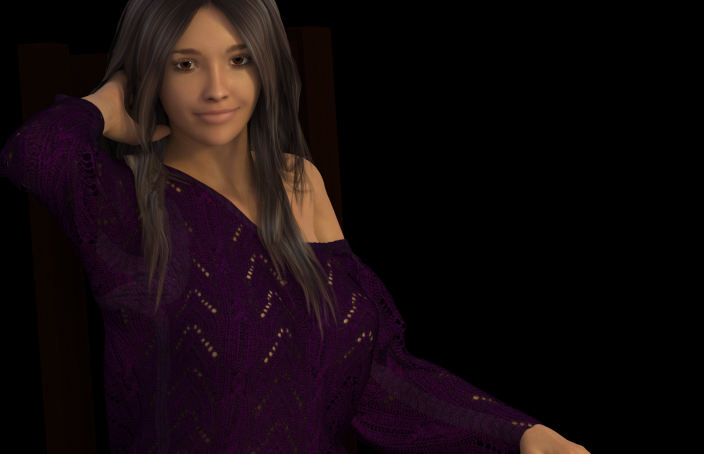 admin All posts from admin
0

As the only daughter of her parents, Bronwyn enjoyed a privileged position as a child. The wealth of her family wrought a degree of comfort that not many Tamarians enjoyed, enabling her to experience a carefree childhood. Since her three brothers were all much older, she spent most of her time as a young girl in adult company. Bronwyn developed neighborhood friends to replace sibling relationships, often choosing those who felt isolated and left out as companions.

She joined her mother and father in community service work, developing a passion for helping other people at a very young age. For this reason, the service-oriented stories she heard at school from Sister Brigit, Sister Fritzi and Brother Micha – who served as teachers during her primary and elementary years – inspired her to join the priesthood. All of Bronwyn’s relatives heard her express this desire. On a trip to Marvic, Tamaria’s capital city, she badgered her parents to visit the Temple Elsbireth, and once there, begged them to let her stay.

To her father’s surprise, Bronwyn’s mother met with Priestess Alba and subsequently consented to leaving their only daughter behind. From that moment forward, the young woman’s life changed dramatically.

Acceptance and integration into the Sacred Community came easily at first. Bronwyn’s sweet character endeared her to senior members, she became well-regarded for her humility and kindness, and her first year at the Temple went well. She endured some low-level scorn from other girls who grew envious of the favor she received from the leadership, but Bronwyn took this in stride and made an effort to forgive and accept.

Three major events in her second year altered the course of her experience. Bronwyn – who was already bigger than most of the girls her age — grew tall, thick-hipped and heavy breasted. This made her clumsy and slow on the martial arts mat, drew inappropriate attention from the boys who lived in the Sacred Enclosure, and stirred the contempt of more popular acolytes in the women’s cloister. The girls called her a fat cow and made mooing sounds in her presence. Some of the boys began to bark and stalk her like trained cattle dogs. The teasing became relentless.

But that was also the year that Kira and Algernon came to the Temple. Despite being warned that the twins came from a broken family and expressed significant social dysfunction, Bronwyn admired Kira’s intelligence, her charisma and appreciated the fact that the prettier blonde girl tolerated absolutely no nonsense from anyone. Unlike Bronwyn, Kira had a slender build. She excelled in martial arts and quickly became one of the top fighters at the Temple. The two young women became close friends, and in defense of her best friend, Kira broke the nose of an acolyte who’d teased Bronwyn about her heavyset body while they were in the shower.

Kira’s intervention put an end to the nonsense from the girls – at least in Kira’s presence – and the boys began holding their tongues because they rightly feared the wrath of Algernon, whose martial skill everyone respected and whose temper terrified even the Temple leaders. Nobody, even the senior priests, dared to cross the Ravenwood siblings. This uneasy truce continued until Kira also entered womanhood.

At that time, the third major change wrought trouble in Bronwyn’s life that she’d never previously experienced. Kira became Sister Astrid’s lover, which created conflict in her friendship with Bronwyn. While Astrid is typically a selfless woman, her jealousy of Bronwyn’s close relationship with Kira became justification for imposing undeserved misery.  Astrid ruthlessly wielded her authority, assigning every dirty and disgusting task to Bronwyn in an effort to keep her far away from Kira.

As sexual abuse became rampant within the women’s cloister, Bronwyn felt intense social pressure to participate in erotic experimentation with other girls. Aside from learning how to kiss at this point in her life, Bronwyn never became part of a harem – as happened to Kira – and was never passed off to the men, either. Her friendship with Kira soured for awhile, but after Astrid and Algernon rescued his wayward sister in Kameron, their relationship re-established with clear boundaries and strengthening commitment. Many years later Bronwyn learned that she had an unlikely protector during the period of sexual abuse at the Temple. The truth of that story wounded her.

Her dream of becoming a priestess and serving the less fortunate took a strange turn after the Supreme Council removed Kira and Algernon from the Sacred Community. Despite having faced Discipline for her association with Kira, the High Priest commissioned Bronwyn to serve as the court-ordered Temple liaison overseeing the ministry to sex industry workers that Kira and Algernon began. The Council had hoped she would undermine the Ravenwood twin’s ministerial efforts, or at least provide evidence that the former members of their community were not engaged in legitimate service.

Caught between loyalty to the institution and her best friend, Bronwyn consistently sided with Kira. Her reports accurately outlined Kira’s efforts to reconnect wayward women with a supportive social structure and reintegrate them into society. She also explained Algernon’s role as a deterrent to violence from the pimps and hired thugs the sex industry leaders had been using to keep their women in line, as well as his role as educator for the women and their children. These reports did not sit well with the Supreme Council, who subsequently deemed Bronwyn “unfit for service” and dismissed her application for the priesthood.

Devout for her entire life, Bronwyn’s faith was shaken – but not destroyed – by the Temple leadership’s decision to deny her ordination.  For a time, she considered leaving the ministry entirely, but ironically it was Garrick, who – though he does not share her faith – persuaded Bronwyn to remain true to her calling.

Following the strict, spiritual teachings and disciplines of the Temple is not always easy, even for a selfless and caring woman. Bronwyn makes an effort to live in harmony with her values, yet she has a tender heart that aches deeply when she gets hurt. Because she’s so nice, the young woman is often taken for granted and misjudged as being naïve. After joining in Kira’s ministry full time, she lost the respect of friends at the Temple and shares in the scorn projected on the Ravenwood twins for their unusual ministerial efforts.

Nonetheless, she remains true to her faith and holds her head high, confident that her path harmonizes with her values.

As part of her Temple training, Bronwyn studied physiology, food and nutrition. She learned how to cook wholesome, delicious meals on a tight budget, as members of the Tamarian priesthood are expected to subsist on minimal income. This ethic steeped into her soul to such an extent that she lost interest in her family’s inheritance and seriously considered choosing Poverty as one of her Sacred Vows. Her dismissal from the priesthood prevented that from happening, yet she retained a commitment to communal living that her parents and siblings struggled to understand.

Bronwyn became an excellent cook, devoting herself to mastering the culinary arts in the Temple’s kitchen. Her love of pleasing other people fit well into this vocation, and preparing meals became the primary means by which she contributed to Kira’s street ministry. Because women who leave the sex trade often suffer from undernourishment, Bronwyn uses her skills to restore their full health through diet and education.

Criticism of her size often factors into her role, however.  She hears whispers that a heavy girl has no place advising anyone on proper nutrition, despite the fact that she is perfectly healthy, and that her size has nothing to do with her expertise on the topic.

Being buxom, brown-haired and dark-skinned for a Tamarian girl has often made Bronwyn a target for ridicule. However, her father is a strapping man with big shoulders and a broad chest, and for reasons that have more to do with genetics than lack of self-control, Bronwyn has struggled with being heavy all of her life. Her height, hourglass figure and thick thighs prevented her from ranking high as a martial artist, yet she is very strong and, thanks to Temple training, capable of defending herself.

As a child, her brothers frequently ribbed her about being fat and ugly. This, coupled with relentless teasing during her transition into womanhood, made her feel self-conscious about her body. While there were other full-figured girls at the Temple, only Bronwyn had dark skin, dark hair and dark eyes. The contrast between her complexion and those of prettier, skinnier, pale-eyed girls like Kira, left her believing that she was unattractive.

However, Algernon found her physical attributes attractive, even early on. Given Bronwyn’s relationship with Kira, he’d initially assumed that she preferred girls and left her alone during their time at the Temple. Once he learned that this was not the case, Bronwyn grew into the subject of his desire.

She liked him as well, but worried that his interest was limited to her body. They struggled to resolve this conflict, and as he grew more frustrated with her lack of trust, Algernon’s libido led him astray. A fateful encounter with Brenna’s “not-so-little” sister, Thea, fueled his imagination and turned his head.

Bronwyn felt heartbroken. The old insecurity of believing she wasn’t pretty enough to sustain masculine attention roared from her subconscious. Having never seen Thea, but hearing that she was as lovely as Brenna – yet bigger – amplified her sense of loss.

Then, explicably, Algernon wrote a confession letter, asked forgiveness and promised to come back. Struggling against his betrayal, Bronwyn’s spiritual inclination to extend grace prevailed and the couple reunited. Yet for a very long time, Bronwyn resented Thea and felt suspicious that Algernon secretly longed for her.

In truth, Algernon chose Bronwyn over a more beautiful woman. He did this after much thought and prayer, realizing that she made a better partner for his ministerial passion. Her selflessness, practical intelligence, shared language and culture also made their relationship easier. He didn’t need a prettier woman. He needed Bronwyn, and once he’d made that decision, Algernon devoted himself to her with unflinching loyalty.

And she blossomed in the bright light of his affection.

Bronwyn didn’t begin as an important character in the series. She’s grown into her role over time, both as Kira’s strong supporter and Algernon’s partner. Her relationship with the twins does create tension, as the closeness that Kira experienced with her brother has changed, and his reliance on Kira for counsel and support shifted in Bronwyn’s favor. While this dynamic is central to the human experience, its course will only be revealed as the Deveran Conflict Series unfolds.