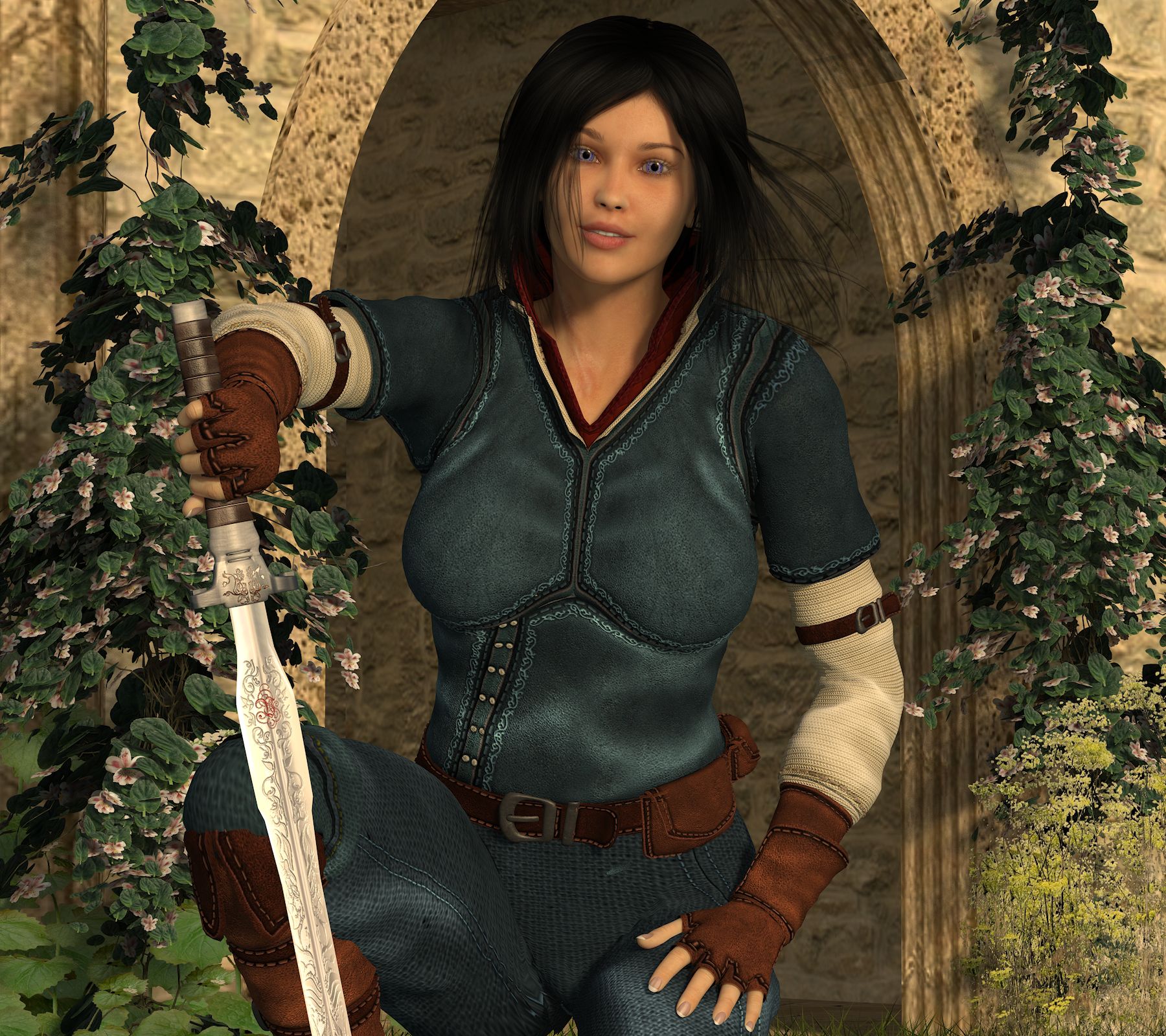 admin All posts from admin
0

Some characters are easier to write than others. Brenna presents a challenge for me because she’s a woman, she comes from a culture that honors individualism to a far higher degree than is the case with my own, and her femininity has to shine through in spite of her fighting skill. While women can certainly be tough, depicting her as a man in a woman’s body detracts from the interest of accurately reflecting womanhood in a heroine. Therefore, a female’s perspective becomes an ever-present filter through which Brenna’s character is revealed whenever I write about her.

Like most women, she’s complex. Growing up at a time when her nation faced nearly constant conflict, Brenna experienced ongoing personal loss from a young age. This gives her a melancholy perspective that is tempered by the strength of familial relationships and lifelong friendships with Woodwind and Tegene’s Abelscinnian family. She shies away from attention, doesn’t laugh very often, and her subtle smile is usually reserved for Garrick.

Beneath her shy demeanor lurks a resilience derived from enduring faith and early childhood training in the martial arts. While she is a small woman, Brenna’s arms and shoulders have been honed by decades of working with a bow and sword. Brenna prefers avoiding conflict, but with a weapon in hand, she’s quite formidable.

“Welcoming the Intruders” served as the opening image on the Newadventure web site for many years.

The main influence over her thinking is rooted in strong, personal faith. She believes that Allfather loves her, that he has gifted her with every good thing that sustains her life, as well as lavishing her with beauty, talent, intelligence, a loving family and Garrick. While he maintains a secular mindset, her Lithian faith does not require her to convert anyone. Like all other aspects of Lithian culture, faith is a deeply personal matter. There are no requirements for Lithians to marry within their own religious tradition, which leaves Brenna free to love whomever she chooses. It also leaves room for her to accept Garrick’s secular point of view. He recognizes the power of her belief and extends respect, though he does not personally believe in God.

This facet of Brenna’s love life has created tension among some of my Christian readers, who know that I’m devout and presume that the New Testament admonition against being “unequally yoked” should apply to Brenna. Further, some argue that Garrick should be convinced that her faith is “right” by virtue of her mysterious healing skill, and he should convert to her faith. Those arguments miss the point of my goal as a writer. Brenna does not make demands of anyone, nor does she insist that others conform to her worldview. She wouldn’t be Lithian if she did so. Further, not all of my readers share my belief in Christ. For them, a heroine who doesn’t compel conformity is a refreshing change from their — often tedious — day-to-day experiences with religious people.

She is an excellent musician.

I grew up in a household where music was pervasive.  Old reel – to – reel recordings of the King’s Heralds quartet and Del Delker, family worship around the piano, church services, the California Boys Choir, my middle and high school bands, as well as high school chorale dominate my early experience. Piano music, in particular, provided a sanctuary in my turbulent home life.  Memories of my sister passionately playing Beethoven steeped into my soul. That’s why it seemed natural that the heroine of my novels should also play the piano.

Brenna’s musical skill says something important about her. No one who can perform professionally does so on raw talent, alone. “The easier it looks, the longer it took” is a trustworthy saying with respect to skill in any performance art. Behind my description of her astonishing ability on the keyboard is a lifelong commitment to endless practice. Brenna doesn’t just play. She works at her skill for hours every day, whenever she can. This reveals self-discipline that is also manifest in aspiring to excellence in everything she does, including her relationships.

Like all women, Brenna has a healthy libido. While I describe a great deal of sexual tension in her experience, intimacy is never explicitly detailed in the novels.

Another area of contention among conservative readers centers on my depiction of Brenna’s sexuality. It makes no sense to me that an attractive woman would not be attractive to others, and further, that she would have no desire of her own. The more I encounter objections in this area, the more I’m convinced that reader projection lies at the root of this complaining. Perhaps the truth is that I’m describing behavior which hits a little too close to home for people who repress their own sexuality. The Deveran Conflict Series is far less lurid than passages I’ve read in the scriptures, but Brenna experiences undeniable physical attraction to Garrick, just as he does to her. One reader commented, “You could write real bodice rippers if you chose to do so,” and that’s probably true.

Now, if I wanted to write steamy romances, they’d have already been published. The fervor of Brenna’s yearning for intimacy starts early in the story, building into an amorous relationship with Garrick that is praiseworthy and pure. The fact that she considers intimate pleasure a gift from Allfather – and that she prays while having sex – indicates that she’s acting in harmony with her culture and upbringing. Brenna is not at all embarrassed about her sexuality. That’s who she is.

One of my beta readers discussed this with me. She said that some readers are accustomed to “Christian romance,” which is completely chaste, and that these readers are expecting something similar out of me. That kind of writing may have a place, and I don’t want to judge anyone, but I’m not writing books to admonish anyone to deny the delight that I believe God gave them. If my depictions bother you, then read something else.

The top of Brenna’s head doesn’t quite touch the base of Garrick’s chin when she stands.

Brenna’s name means, “little one with raven tresses.” I have described her accordingly. In western literary history, heroines tend to be beautiful (and blonde), but I’ve decided to twist that concept a little by revealing two elements of Brenna’s beauty that cause trouble for her and function as a social critique. The first, is that being pretty creates a perception among many people that beauty is her only praiseworthy trait, and that she must be valued because she’s pretty. It’s true that many beautiful people (men as well as women) become self-absorbed and entitled in childhood and never grow out of that, yet I have known at least two very beautiful women in my life who rank among the kindest and gentlest people I’ve ever met. And like them, Brenna’s good character, her talent and intelligence are consistently glossed over as other people in the milieu evaluate her face and figure to the exclusion of everything else about her. Men tend to either project their lust, or fawn stupidly in a lame effort to please her. Women often simmer with envy and despise her without reason. In most cases, Brenna is not taken seriously. She’s frequently dismissed as Garrick’s plaything.

Brenna is not a trope. I’d like readers and viewers of my renders to get over their silly, middle-school giggling and raising of eyebrows over the fact that she’s a busty woman. Many women who share her shape exist. I grew up with a mother, a sister and cousins who are all well-endowed, and likely for that reason, I find an hourglass shape quite beautiful. Yet I’m stunned watching people roll their eyes and snicker when they see a render of Brenna, her sister, Thea, or Bronwyn. If I find that body shape appealing, why make a fuss about it?

Curiously, however, once readers get to know Brenna in the stories, they will often tell me that they find it irritating that she is so widely derided by people in the milieu, just because she’s bosomy and Lithian. That’s my point. There is much more to her than her appearance, or her race. Depicting her this way shines a bright light on how we value women for what they look like, rather than their work ethic, intelligence, talent, skill and any other praiseworthy attributes they exhibit. Brenna serves as a vehicle to expose that particular hypocrisy. When you judge her, you’re proving that I’m right.

Among the Deveran people, Brenna’s beauty also creates a belief that Garrick is only interested in her because she’s attractive. Yet after her experience at the Casa del Matados, where she received the ugly scar on her neck, Garrick remains devoted. He loves her despite the fact that she’s no longer perfect. That says something important about him. Brenna will always bear the reminder that an angry, ignorant man tried to cut off her head with a machete, yet that hasn’t deterred Garrick from loving her.

Lithian garments are so tight, they can only come off when the wearer is willing. Maiden garments are translucent, but here Brenna’s halter is opaque because she’s already married.

The Deveran Conflict Series is a science fiction story that is probably unlike any other you’ve read in the past. There is no plastic, no space travel, nor are energy weapons featured. Technology is present and pervasive, but it depends on the culture I’m describing at any given time. Brenna’s people, the Lithians, created light-powered forges in which they alter the subatomic structure of material, allowing them to manipulate the properties of everything they build. For example, they’ve developed self-sharpening tools that interface with the mind of the user to correct improper technique. A person chopping vegetables with a hyper-sharp Lithian knife can’t cut themselves with it, as the knife will not penetrate flesh unless the person using it wills it so. Their bladed weapons are also self-repairing and self-sharpening.

This manufacturing technology has also imbued textiles with features so advanced, Lithian fabric responds to the will of the wearer. Color, texture, transparency and hardness reflect whatever the wearer desires. I thought about my eldest sister and cousins complaining endlessly about horrible bra straps and backaches, and introduced halter tops into my stories that make a woman experience support like her breasts are underwater. No more backaches, no straps that dig into the shoulders, and because they’re selectively permeable, the garments keep her warm and dry in winter, and cool in the summer by wicking sweat away and radiating body heat.

The primary science that relates to Brenna, aside from her halter, is Lithian biology. She’s a tetrachromat, which means she’s able to see UV light, at the price of slightly diminished visual acuity during the daytime. This changes her perception radically, opening her mind to aspects of the Deveran milieu that remain invisible to Garrick. Also, Lithian reproductive biology is unique. Men and women bond for life and never mate with anyone else, due to a hormone cocktail released during intercourse. Lithian women also experience a fertile period called Y Newen, in which they become intensely interested in sexual relations. It’s triggered by many factors – including the desire of the woman, herself – and Lithian women can only become pregnant during this period. Misunderstanding this biology has led many non-Lithians to presume that Lithian women are insatiable. In The Edge of Justice, a Tamarian doctor refers to Brenna as “a bathycolpian wood-nymph witch” for this reason. That’s not true, but Brenna is frequently subjected to ridicule of this kind.

Most of the technology I describe in the milieu is a secondary consideration in the story. My focus with Brenna is to present a compelling character who earnestly lives what she believes, and while she faces great difficulty, her faith and strength of character prevail.