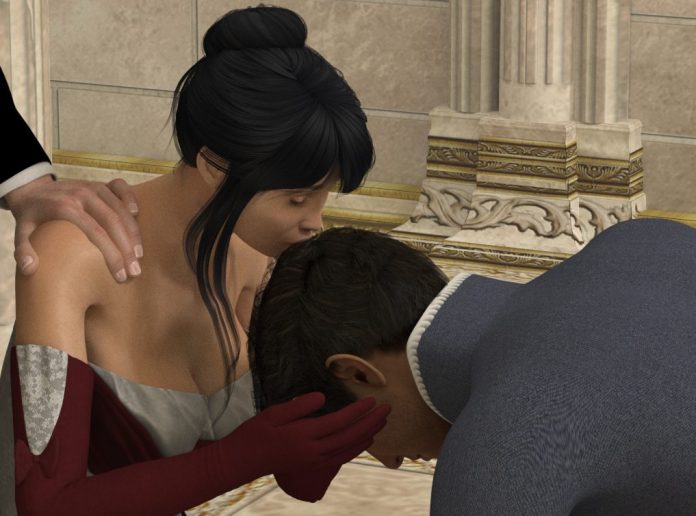 When I first began using 3D tools to illustrate my stories, one of the ideas I had at the time was that I could create animated scenes from my books with total control over all the content. While I’m not averse to sharing power with other people, the problem of relating a vision of what I’m imagining with someone who has greater skill as an artist is particularly difficult. I’ve had issues paying artists to paint my book covers for this reason. Invariably, what they’ve come up with has little or nothing to do with the actual content of my stories.

The problem with this cover is that it’s supposed to depict Jhiran Vell, the strange, gwynling woman with psionic power. While she IS a winged being, her wings are typically folded and hidden on her back. Further, they are mammal wings, not feathered wings, and the ones in the image are far too small to enable the gliding flight that I describe in The Long Journey and the stories that follow. She is also shown gazing into a crystal ball, as if scrying into the future. But she can’t see the future. Jhiran can read the thoughts and memories of anyone with whom she maintains eye contact without the use of a tool, such as the crystal ball shown on the cover.

My inability to translate what I’m imagining into someone else’s mind more or less forces me to develop my own skill in this area. I write from experience that while 3d still images should be enough for illustrative purposes, striving to depict scenes using animation is very difficult. When I explained this to my youngest son, who is an artist, he laughed and said, “Yeah, that’s why I hate 3D animation.”

I’ve explained before that there are two major types of clothing props available for use in 3D art. The conforming variety, which essentially “sticks” to a character’s mesh, is not well suited to motion. In real life, we’re accustomed to clothing that slides, stretches, folds and bends along with us as we move. For the sake of approximating realism, dynamic clothing – where the clothing prop is simply parented to a figure – can flow over the character’s mesh in a manner that looks a lot more like an actual skirt, blouse, or a pair of trousers.

While that may sound great, in order to avoid headache related to creating the initial fit – from which subsequent cloth movement is calculated — all animations involving dynamic clothing have to start in the zero position. In the case above, Brenna is actually descending beneath ground level, which means everything in the background (like the stairs and the wall behind her), along with the cameras and lights, ALSO have to be adjusted to compensate. This is a tremendous amount of work.

Why not just set the animation above ground level to make everything fit, you ask? It’s a good question. Usually cloth simulations require at least 15 frames to move the figure from the T pose into the starting pose. This allows the cloth to get into the correct position on the figure. An additional 15 frames is usually enough to “settle” the cloth where it looks most natural.

Moving the figure away from that zero position creates movement that may be more than the computer can calculate. Large character movements early in the animation result in weirdness that may actually crash the simulation altogether. Once the position of the initial T-pose is moved, it changes everything else and a whole lot of vexation takes place.

The idea of dynamic clothing that follows a figures movements and the reality of what my software can actually do are not always the same. Any figure that is remotely different in size, or body shape from the standard ones that come with the program will require quite a bit of tweaking. This is just as true for male characters as it is for the females. Below, we have Jawara. I’ve described him as a big, tall man in my stories. Rendering with him has always been problematic because none of my clothing props actually fit him. You might think that having the computer calculate a perfect fit would be an ideal solution, but the images that follow illustrate that this isn’t always the case.

Another issue relates to settings in the cloth room. Simulating silk will give a different result in simulating denim, but the settings have to be adjusted for differences in cloth density, resistance to stretching and several other variables. This can get complicated. Here is an example of air dampening, the calculated reaction of the cloth to the movement of air.

In the animation, air flutters through the top of the blouse in a way that looks completely unrealistic. It’s not that women don’t cross their arms beneath their breasts like this. The trouble is the software doesn’t know how to calculate the flow of air.

I can use a morph brush to “fix” this, but every frame has to be adjusted in order to make that work, and in an animation, it becomes obvious that something unnatural is going on.

A common problem with many 3D applications is that the curved interpolation of body part movement, which looks more natural than a straight line, can create an issue with body parts (like arms, legs, or props, like hair) moving through the figure’s mesh. I see this commonly in amateur 3D animations and in low-end games.

There is much more that I can write about this topic. My point in this post is to open readers’ minds to the significant challenges that face amateur animators. This is not easy. It’s nit-picky, tedious work that requires rendering over and over again to fix issues that aren’t obvious in preview.

Scripts don’t always work properly. Strange things happen with body parts or cloth props that expand for no apparent reason. The more often a motion scene is modified and re-rendered, the more likely that little glitch problems will occur.

That’s why Disney, Pixar and the other big studios pay TEAMS of animators big money to do what they do. I have neither the budget, the time, nor the animation resources to replicate what they’re capable of producing. So when you see my animations, understand that I’m doing the best I can with what I have.