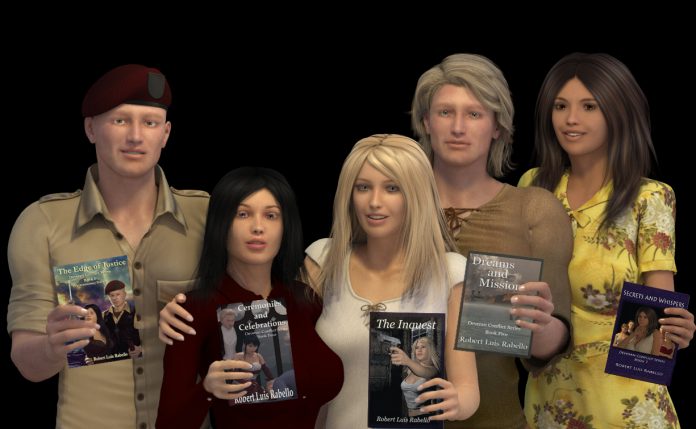 What’s in the Deveran Conflict Series for you as a reader?  If you like interpersonal, introspective and international conflict, this is the series for you. If you like science fiction and fantasy that makes sense, you’ll easily immerse yourself in the Deveran milieu. If you enjoy compelling characters sustained by courage and raw talent these books will introduce you to people who will occupy your dreams.

I’ve outlined the main themes for each novel below. You can read them thematically, or just for a good adventure romp.

The Edge of Justice

How do people determine what is right or wrong? This novel explores three options through its three main characters. Accepting societal consensus is one method. The combination of values developed in a given culture will inform the moral choices for most people. Ascribing to an external standard of morality, such as belief in God, is another. This may, or may not, overlap with societal consensus, as many devout people (like me) often find themselves at odds with the values mainstream religion is promoting at a given time. Finally, a person may develop an eclectic worldview informed by different philosophical streams of thought. Which is right for you? Only YOU can tell . . .

This is a story centered on the value of persistence and the enduring power of love. Goals that are worth attaining require effort, and in this tale, Garrick — and his younger brother, Algernon – undertake difficult and perilous experiences in order to reunite as a family, reconcile sibling conflicts, and move into responsible adulthood.

The Long Journey is both my lengthiest and best-selling novel.

Each of the four main characters in this tale must deal with an existential threat to their being. For Brenna, the conflict is a crisis of faith. For Garrick, it’s a question of his leadership. Algernon must respond to serious threats concerning his integrity, while his twin sister, Kira, wrestles with her personal identity. There are many surprises and challenges along the way.

The core theme of this novel is forgiveness. Each of the characters face situations in which past mistreatment and abuse must be confronted. The manner in which each of them approaches this task differs, as does the degree of success they experience. While overcoming dysfunctional family dynamics plays a large role in this story, decisions about living with integrity in a world of evil also feature prominently.

No one likes to deal with their personal flaws. Few people admit the darkness that lives in their hearts. In this story, the characters face the consequences of their past decisions. Brenna and Kira move forward and gain confidence. Algernon is haunted a badly flawed decision. Garrick experiences terror on a scale beyond his ability to cope. In this story, each character struggles to remain true to their dreams and missions.

This novel explores how honesty, integrity and loyalty overcome treachery. Family secrets and conspiracies lay at the heart of conflict as this story unfolds. Secrets and Whispers is the shortest book in the Deveran Conflict Series thus far.